We had a very successful Cleanup event Saturday morning, April 25, 2020.  A big THANK YOU! to all who participated.  This year was a tad different from previous years as the City requested pick up location at home driveways instead of designated street corners.   A number of neighbors elected to work around their homes and street while others met (observing social distancing) at Wagon Train Rd and the Kirtland fence, another group did the traditional cleaning of the east side of Four Hills Rd from Winterwood Way Rd to the Tijeras bridge, and a third group tackled the entrances to the Open Space.
Short Notice Note:  We plan to be involved in another city-supported Clean Up day on Saturday, Sept 26, 2020.  We are thinking of covering our little Park, The “Y”, and the entrances to the Open Space off of Stagecoach and La Cabra Roads.

On Wednesday, March 18, 2020 I had a very productive phone meeting with the Albuquerque Open Space Division (AOSD) folks in charge of our area.  The group included Jim Sattler, Assistant Superintendent, Tricia Keffer, Planner, and John Keliiaa, Parks Programs Specialist.  AOSD also has an Education Coordinator, Kyle Bality, who would be glad to work with us.

AOPD provided the map of the Manzano/Four Hills and eastern Tijeras Canyon Open Spaces shown below.  Take a look at the new Open Space (OS) acreage additions to the north of Manzano/Four Hills (M/FH).  The combined OS areas now cover about 380.5 acres with the Manzano/Four Hills block covering 266.5 acres.  The newer adjacent OS areas are primarily accessed off of Rt 333 (Old Rt 66) on their northern sides.  They include from west to east, Rt 66/Little Beavertown (63 acres), Chant (13.4 acres) purchased in 2018, and West Tijeras (37.6 acres) purchased in 2019.   Currently there are only three formal entrances to all of this acreage.  They are: the turnout on Rt 333 that accesses the West Tijeras block, and the two entrances in Four Hills Village- at the heads of Stagecoach and La Cabra roads.  AOSD is still actively seeking to acquire land within the eastern portion of Tijeras Canyon. They have recently posted a sign at the Stagecoach Rd trailhead showing the new Open Space extensions into the lower Tijjeras Canyon (west of Four Hills Rd).

Ultimately these areas, including M/FH will all be interconnected by trails.  However, the three northern areas are currently being partially fenced to block off motorized vehicles.  Some areas will be completely restricted for a while as AOSD implements plans to reestablish native habitats.  Gaps have been left in the fences to allow hiking.  A new parking area and formal OS entrance is under construction along Rt 333 at the north end of the Rt 66/Little Beavertown block.  It will include parking space for horse trailers.

I asked if there were any plans to link these southern mountain front Open Spaces to the Cibola National Forest.  The other Open Spaces in Albuquerque are either along the Rio Grande and its tributaries or up against national forest to preserve wildlife corridors.  Unfortunately, the AOSD is currently blocked from doing that in our area.  The adjacent Manzano section of the US Cibola Forest is classified as a “military reserve”, dating from WWII, and it is excluded from use by the general public.

The boundaries of the M/FH Open Space are not well marked and that it is hard to tell when one was on public OS lands or on private property.  In fact, there is no signage on the eastern and northern sides of the M/FH block.  Many of the fences are either cut or appear to be in the wrong places.  We all agreed that the south side of the block didn’t need any more definition than the existing fences of the Base.  I asked if more boundary signs could be added especially along or near the informal entrances to the M/FH acreage where trails cross over from private land onto OS land.

AOSD told me that, yes, many of the fences within and around M/FH Open Space are not in the correct positions and they agreed there is inadequate signage.  There is a new survey of the eastern boundary being made.  It is being paid for by the private landowners along that side.  New corner posts are being set with new fencing proposed but not yet budgeted.  The overall acreage within M/FH Open Space is not expected to change greatly.  Mike Sattler said that they would put more signage along the boundaries.

We also discussed maintenance and improvements to the existing trails in the M/FH Open Space.  I reported that the wooden rail fence along the west side of the block, along the La Cabra and Stagecoach entrances, had several broken or missing planks.  AOSD was unaware of it, agreed the fence is City owned and they would take care of repairing it. (Update: in June I received notice from the City of Albuquerque that funds had been set aside for materials an labor to repair the wooden fence but the work has not yet been started)   Repair work on the main M/FH trail loop (“Four Hills Trail”) is ongoing and scheduled to continue.  I requested that some sections be widened and others made smoother, particularly along the eastern side of the loop. This would make it easier for folks with walking difficulties or accompanied by small children to use the trail.  I also requested additional signage to mark the Four Hills Trail more clearly, especially at some of the major junctions.  The AOSD folks said they could do that.

AOSD requested our help in periodic cleanup of the OS areas.  I am sure we could round up volunteers at least a couple times of year to do that.  AOSD told me about “Trail Watch” which is a volunteer group organized under the auspices of AOSD and coordinated by Dion Eps.  This group hikes the OS trails and reports needed repairs/issues and helps with cleanups.  There is a 2 1/2-hour orientation class run at AOSD’s Coors Rd office.  I will sign up for it once they start holding them again.  Is anyone else interested?

Obviously, there is a ton of work involved in maintaining, protecting, and growing Albuquerque’s wonderful Open Spaces.  You will have noticed that there are no hard time frame dates for the projects mentioned above.  As plans, work programs and educational programs become finalized, I will try to keep you all informed on this website.  I hope we can organize an FHV volunteer cleanup along the M/FH trails soon after the current virus restrictions are lifted.  In the meantime, enjoy hiking in the Open Spaces.  Stay well and happy!

On Friday night March 27 someone or a group of vandals pulled down the main double pipe gate at the Stage Coach Rd entrance to the Open Space.  Tire tracks suggest that a truck was used to pull over the gate.   The truck continued heading east on the old ranch road where it drove off the road and damaged the alluvial surface and the native vegetation.  Obviously, these characters don’t care about the law or the fact that it takes years for desert land to recover once vehicle tires have ripped up the surface.  We notified One Albuquerque Open Space authorities by email on Sunday and called 311 on Monday morning about the damage.  The City had the gate fully repaired by Monday evening.

In addition to this major damage there have been several incidents of tagging on signs within the Open Space.  Again, why someone feels obligated to damage a beautiful area is a mystery.  FHV Association is the official adoptive organization for the Manzano Open Space.  It is our job to watch over and protect the area.  If you see someone damaging the Open Space or find something that needs repair, please either call 311 or notify me so I can reach out to the proper authorities to have the issue handled.
​
Rusty Goetz (rustygoetz@comcast.net) 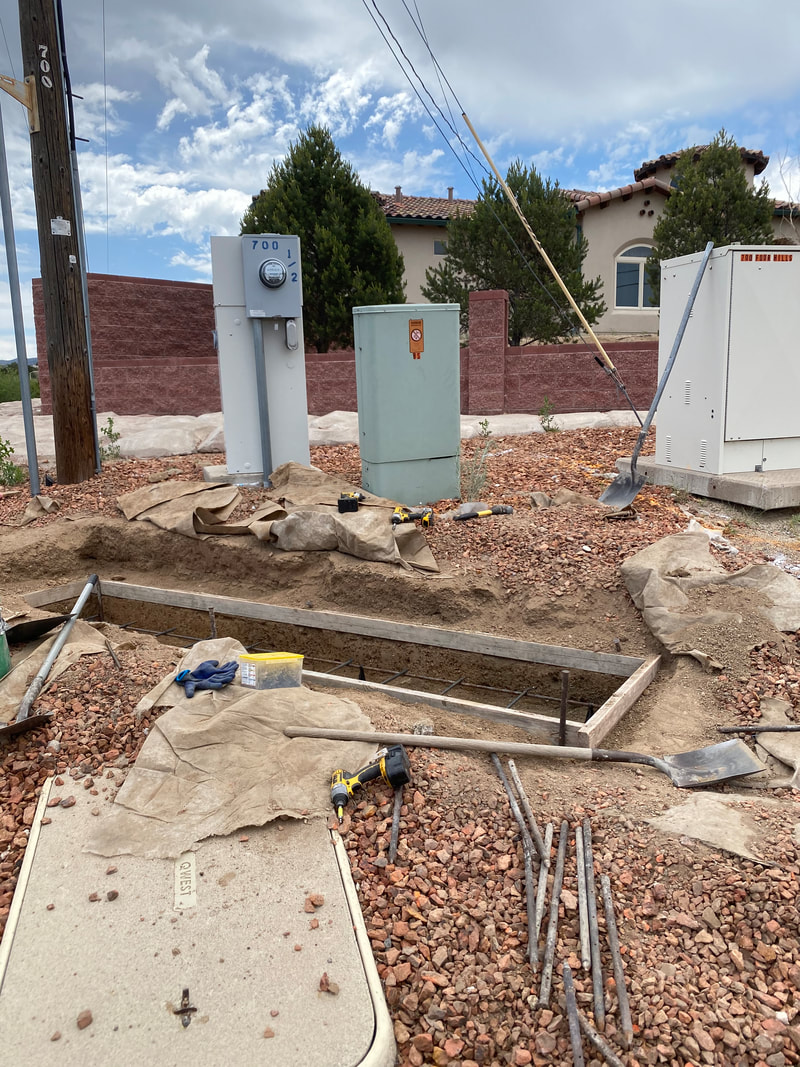 The plans for the new Four Hills Village sign, [design shown below, beginning installation work shown above] which will have an information board and will greatly enhance the entrance to Four Hills Village, have received the necessary approvals and are currently with the contractor. The $20,000 that our District 20 State Representative Abbas Akhil secured for security cameras near the sign is available, earmarked in a City of Albuquerque account. Collaboration with the Albuquerque Police Department (APD) is ongoing concerning the installation and potential monitoring of the cameras. City Councilor Don Harris has agreed to provide the funding for the lighting of the sign. 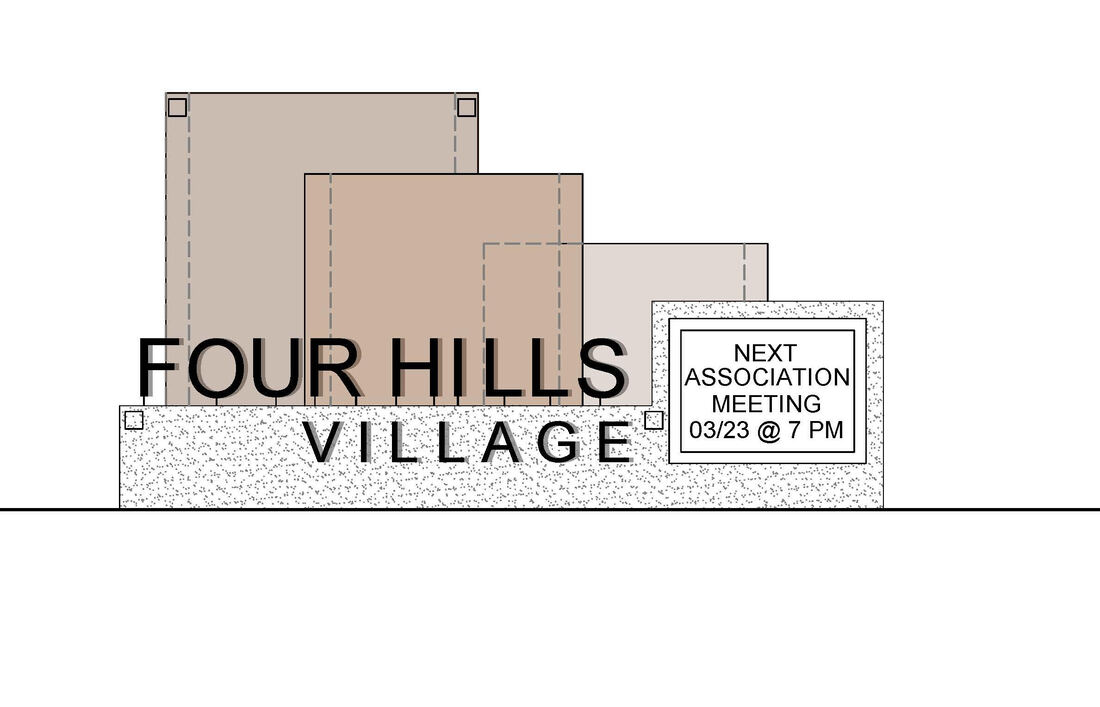 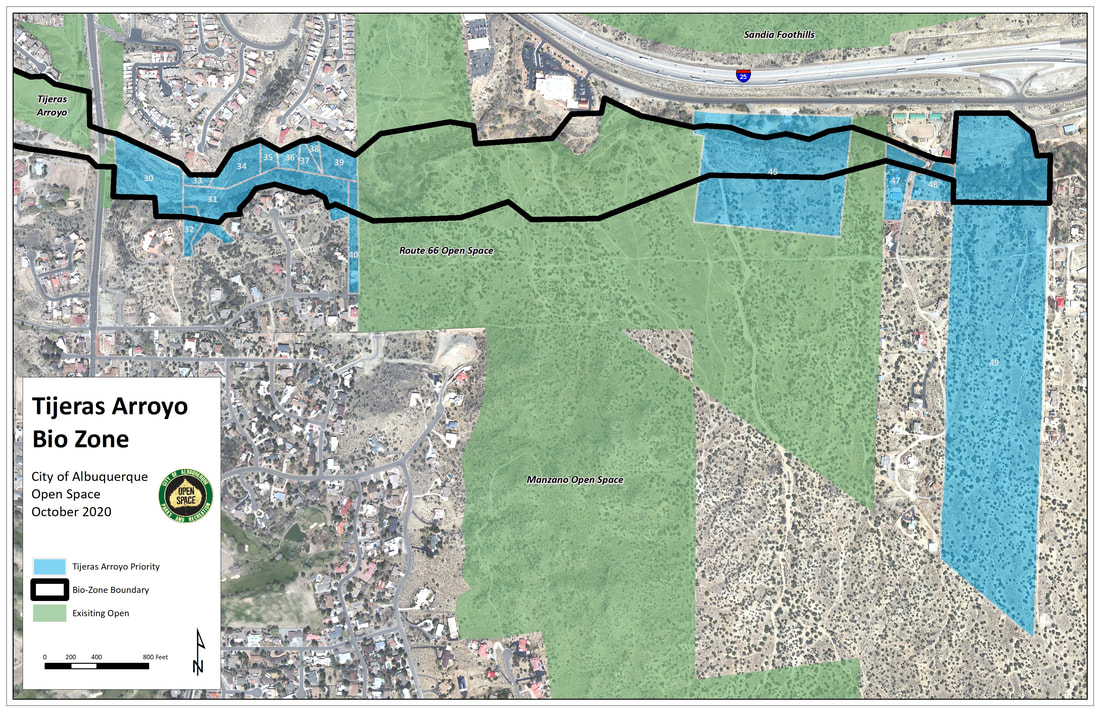 1 October 2020: compare with "original" Open Space map above - Good News!
Spring is here and so are the Canyon Winds.  We are officially in both Fire Season and a major drought.  Please, be careful with any ignition sources you handle- brush fires are all too easy to start and can quickly run out of control.  Take a look at your yards and the Open Spaces and check for dead or dying pine trees.  They are a particular hazard.  Data from the US Forest Service shows that dead pine needles can ignite within 11-12 seconds of an ember touching them (in non-windy conditions).  Standing dead pine trees will burn 50% hotter than living pine trees and dead pine trees are extremely brittle.  They are very likely to have limbs snap or fall over in our high winds.
The first map below is the map that is on the sign at the Stage Coach Rd entry to the Manzano Open Space.  The City has been working hard to link the game trails and water access up and down Tijeras Canyon.

In 2014 the City of Albuquerque published this 128 page PDF file on the Resource Management Plan for the Tijeras Arroyo Biological Zone.
2020 Archive page updated 14 March 2022